The Punjab Football Association (PFA) under the leadership of its president Samir Thapar, who is also an avid sports lover and Chairman & Managing Director of JCT Limited, will host the Final Phase of the 69th National Football Championships for the Santosh Trophy at the Guru Nanak Stadium, Ludhiana and the Guru Gobind Singh Stadium, Jalandhar from March 1 to March 15, 2015.

The ten winners from the Zonal Qualifiers (two group winners from each zone) will lock horns in Punjab for the prestigious Santosh Trophy. The teams taking part in the Final Phase competition will be Punjab and Delhi (North Zone), Kerala and Services (South Zone), Goa and Maharashtra (West Zone), West Bengal and Railways (East Zone) and Mizoram and Assam (North East Zone).

The Opening Ceremony will be held on March 1, 2015 at 14.00 IST onwards followed by the Group A opening match between Punjab and Assam at the Guru Nanak Stadium, Ludhiana, which will host all Group A matches. Raja K.S. Sidhu, Secretary General, Punjab Olympic Association (POA), will grace the occasion with his presence as Chief Guest and he will formally open the tournament.

Priya Thapar, Director, JCT Limited, will preside over the function and she will unfurl the flags of the All India Football Federation (AIFF) and the Punjab Football Association. Nivia Shining Star Football will be the official match ball for the Santosh Trophy.

All the matches in Group B will be hosted at the Guru Gobind Singh Stadium, Jalandhar. Delhi and Railways will open the action in Group B on March 1, 2015 at 15.00 IST.

Deepak Kumar, former Indian international footballer & General Secretary of the Punjab Football Association has stated that the PFA would make every endeavour to make the Final Phase a grand success, after previously hosting the North Zone Qualifiers successfully.

He further disclosed that the tournament would be conducted in close association with JCT Limited as JCT management has been kind enough to support the endeavours in holding the competition. 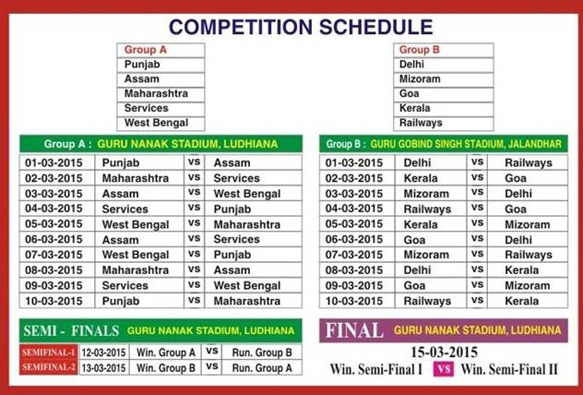