The All India Football Federation (AIFF), the sport’s governing body in the country, celebrated the first ever AIFF Awards in a glittering function at a hotel in Mumbai in the presence of the entire National Team squad and the National Team coach Stephen Constantine. Among other dignitaries present were Shri Praful Patel, President, AIFF, Shri Kushal Das, General Secretary, AIFF and Shri Subrata Dutta, Senior Vice President, AIFF.

Among the key awardees were Jeje Lalpekhlua, India national team striker who scored India’s second goal in the recently played international friendly against Nepal, adjudged the 2016 AIFF Player of the Year; Sasmita Malik, adjudged the 2016 AIFF Women’s player of the year and Sunil Chettri, India’s most profilic goal scorer ever with 53 goals from 93 matches, who received a Special Award for surpassing the milestone over the last year. Sunil is also currently the top Indian scorer in NFL and I-League matches taken together. 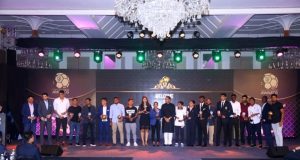 The winners of the AIFF Awards 2017. (Photo courtesy: AIFF Media)

Speaking on the occasion Shri Praful Patel, President, AIFF, said, “This is a defining year for Indian football as we prepare to host the FIFA U-17 World Cup in less than 100 days. I am confident that with the guidance and support of the Union Government through the Ministry of Sports, we believe we will be able to host the best FIFA U-17 World Cup ever. Today is all the more important, because we are celebrating those wonderful players and other key stakeholders of Indian football, without whose tireless efforts, we would not have reached such a stage. I congratulate all award winners for their immense contribution in growing the game in the country and wish them many more such recognitions in the future.”

Indian Football has been on an upswing in recent years, with the National team’s current world ranking of 100, the third best FIFA ranking ever, a huge improvement from the 173 just about two years back.

The team is on the cusp of qualifying for the AFC Asian Cup UAE 2019, the region’s premiere continental football championship. It is presently preparing for their third round qualification game against the Kyrgyz Republic at Bengaluru’s Sree Kanteerava stadium on June 13, 2017. India are currently topping the group after their away victory against Myanmar in the first match of the four-team group. Only the top two teams from the six groups in the third-round of qualification, will make it to UAE in 2019.

As part of their preparations, India played Nepal on June 6 and returned a favourable scoreline of 2-0, with Sandesh Jhingan and Jeje Lalpekhlua getting on the scoresheet.

The sport of Football has also seen a recent surge in popularity with the Union Government led by the Ministry of Youth Affairs and Sports (MYAS) along with the AIFF leaving no stone unturned in this regard with initiatives taken up like Mission XI Million, whose sole aim is to reach out to 11 million kids across the nation.

It was an inspiring and historic match for us at @

Proud of our @fsvguetersloh girls, who have perfor

Preparations in full swing for our #DFBPokalFrauen

Pleasure to catch up with @dfb friends & colleague

First visit to the @dfb headquarters since the beg

It was an inspiring and historic match for us at @

Proud of our @fsvguetersloh girls, who have perfor

Preparations in full swing for our #DFBPokalFrauen

Pleasure to catch up with @dfb friends & colleague

First visit to the @dfb headquarters since the beg

One week to go till the big one: @fsvguetersloh vs