The Confederation of North, Central America and Caribbean Association Football (Concacaf) announced today that Jamaica will host the final round of the 2018 Concacaf Caribbean Women’s Qualifier, scheduled to be played August 25 – September 2, 2018.

The final round, to be disputed among the five first-round group winners, Antigua & Barbuda, Bermuda, Cuba, Jamaica and Trinidad & Tobago, in a round-robin format, will qualify three Caribbean teams to the 2018 Concacaf Women’s Championship.

The road to the road Concacaf Women’s Championship began last month in Antigua & Barbuda, Dominican Republic, Guyana, Haiti and Trinidad and Tobago – each hosted a group of the first round. The participants in each group were sorted during the official draw earlier this year.

The United States will welcome the region’s top women’s national teams for the 2018 Concacaf Women’s Championship, which will crown a regional champion and qualify three teams directly for the FIFA Women’s World Cup France 2019, plus the fourth-place finisher to an intercontinental playoff. The Women’s Championship is scheduled to be played October 4-17, 2018 in Cary, N.C., Edinburg, Texas, and Frisco, Texas.

As part of a year of women’s football in Concacaf, which includes the expanded Girls’ Under-15 Championship, and the Women’s Under-17 and Under-20 Championship, the Caribbean Regional Qualifier will provide access to top level international football to 22 Caribbean Member Associations. This includes over 300 players, thus enhancing an excellent opportunity for development and growth of the women’s game in the region. In total, nearly 2000 female athletes will participate in the Concacaf championships this year across the region. 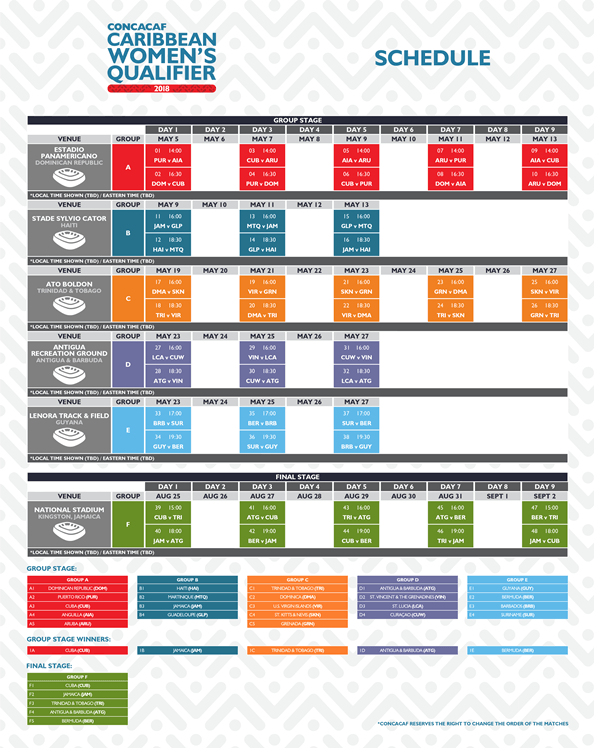