In addition to the established German championship for individual players, the “TAG Heuer Virtual Bundesliga” (VBL), clubs of the Bundesliga and Bundesliga 2 will have the opportunity to compete for the title of German eFootball champion for the first time starting this season. In partnership with EA SPORTS FIFA 19, DFL Deutsche Fußball Liga has launched the “VBL Club Championship” under the VBL brand. Participating clubs have until 21 December to nominate a squad of between two and four players.

The VBL Club Championship will begin on 15 January 2019, with clubs playing every other club once. The match days will generally be played in online mode, but one top match every week will be produced for TV with the players appearing live in the studio. Each match consists of three single games. Two will be played in one-on-one mode: one on the PlayStation 4 and one on the Xbox One. The third game will be played in two-on-two mode on the console of the home club’s choice.

The VBL Club Championship will be levelled-off, i.e. all of the players and teams will have the same aggregated player rating of 85. This means the Bundesliga and Bundesliga 2 clubs can be represented by their own virtual team without any competitive advantage or disadvantage. The German club champion in the VBL Club Championship will be determined in mid-March 2019.

Teams participating in the “VBL Club Championship” can qualify for the later rounds of the VBL depending on where they end up in the final table. Individual eFootballers from the best-placed teams will take part in the “VBL Grand Final”, which will bestow the title of “VBL Champion” on the victorious German player. Players from the other teams can also reach the VBL Grand Final by qualifying for the “VBL Playoffs”, where they will come up against gamers who have made it through the “VBL Open”. This open competition, which will be integrated into the online mode of EA SPORTS FIFA 19 as in previous seasons, can be entered by FIFA 19 gamers from Germany in the period from December 2018 to February 2019. Depending on how successful they are, participants in the VBL can collect EA SPORTS FIFA 19 Global Series Points providing that they register with FUTChampions.com by 31 October 2018. 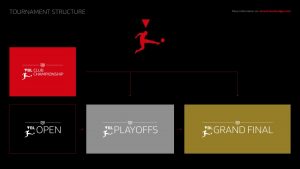 The expansion of the content of the TAG Heuer Virtual Bundesliga is accompanied by a revised brand image. The new logo is based on the familiar Bundesliga signet supplemented by the striking V-shaped cursor that denotes the currently selected player in the game, as well as symbolising the “V” of “Virtual Bundesliga”.

In 2012, DFL became the first professional football league to have its own eFootball competition when it launched the VBL in partnership with EA SPORTS. The VBL is the first competition of a professional league to be integrated directly into the EA SPORTS FIFA game series. The VBL has enjoyed steadily growing popularity since its launch and now has more than 150,000 participants.

Details of the participating clubs and the exact fixtures for the VBL Club Championship will be announced in December. Regular information can be found at virtual.bundesliga.com