On 16 January 2019, the VBL Club Championship – newly founded by the DFL Deutsche Fußball Liga and EA SPORTS – will kick off as part of the TAG Heuer Virtual Bundesliga (VBL). Twenty-two clubs from the Bundesliga and Bundesliga 2 will compete to be the first ever German club champions in eFootball.

Up until the end of the season in March 2019, the participating teams, thirteen from the Bundesliga and nine from Bundesliga 2, will play 21 matches (no return matches). Each match will be played in the “Davis Cup” format. Two will be played in one-on-one mode: one on the PlayStation 4 and one on the Xbox One; the third game will be played in two-on-two mode on the console of the home club’s choice. The same number of points will be awarded for each win, meaning that the final number of points will be the sum of the results of all three matches. At the latest 48 hours before each match day, the participating clubs will be required to name the appointed players from their VBL Club Championship squad. These players then have to be assigned to the three fixtures taking place on a match day. The VBL Club Championship will be “levelled off” – in other words, all players and teams will have the same aggregated player rating of 85. This means the Bundesliga and Bundesliga 2 clubs can be represented by their own virtual, authentic Bundesliga team without any competitive advantage or disadvantage. 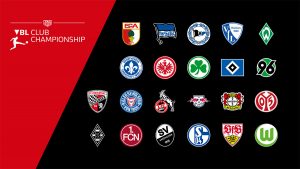 In 2012, the DFL became the first professional football league to have its own eFootball competition when it launched the VBL in partnership with EA SPORTS. The VBL was also the first competition of a professional league to be integrated directly in the EA SPORTS FIFA game series. Since its launch, the VBL has enjoyed steadily growing popularity and now has more than 150,000 participants.

Overview of participants of the 2018-19 VBL Club Championship