Bengaluru FC B left it late but got the job done to be crowned champions of the BDFA Super Division with one game to spare, after skipper Myron Mendes held his nerves to convert a penalty in the 88th minute as the Blues beat ASC 1-0 at the Bangalore Football Stadium, on Thursday.

Needing a win to seal their debut Super Division title, Bengaluru FC B were in no mood to relax as Moosa’s boys switched gears in attack with relative ease. However ASC, out of contention for the title, weren’t going to cave in with ease as the Blues would soon figure out. 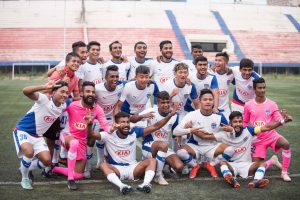 Bengaluru’s first clear chance came in the 36th minute when Altamash Syed tried a cheeky chip over the ASC ’keeper, only to see his attempt bounce off the crossbar before being dealt with by the defence. On the hour mark, Moosa brought on striker Edmund Lalrindika for Advait Shinde and the change put ASC under more pressure. With all green shirts defending, ASC kept throwing bodies in the way of what looked like shots certain to find the back of the net on another day.

In the 68th minute, as many as four Bengaluru shots on target in quick succession, were seen out by some stubborn defending. Striker Roshan Singh then had a header that looked like creeping in, saved by Raj Mutum in the 84th minute. But just when it seemed like Bengaluru would need another game to seal their coronation, Edmund was tripped inside the box to earn the Blues a penalty.

Captain Myron, who has penalty duties to his name but often shares the responsibility, stepped up and sent Mutum the wrong way to finally break the deadlock. The Blues then saw out seven minutes of added time in second half without any panic, to seal the title.

The Super Division was Bengaluru FC B’s second title this season after they clinched the Puttaiah Memorial Cup in October, beating MEG 2-1 in the final. Incidentally, it was Myron who turned up with a late winner (86th minute) in the Cup final too.

#UCL matchday in #Dortmund: Who will win the @bvb0

#UCL matchday in #Dortmund: Who will win the @bvb0