Both of Germany’s top flight leagues look set to go right down to the wire this season. Whilst the focus may have been on the top teams in the Bundesliga, Bundesliga 2 is witnessing one of its most exciting seasons in recent history, with no fewer than seven teams jostling for supremacy.

With 10 rounds of matches still to go, 1. FC Köln narrowly lead the way, just one point ahead of Hamburger SV, as they seek an immediate return to Germany’s top-flight following relegation last term.

That ended a five-year stint in the first division for a team with three Bundesliga and three Bundesliga 2 titles in their trophy cabinet. Now, Markus Anfang’s free-scoring side are in pole position to add a fourth piece of Bundesliga 2 silverware to the halls of the RheinEnergieSTADION.

That is largely thanks to a devastating attack that has registered 59 goals already, at an average of almost 2.5 per game and led by 31-year-old Simon Terodde’s stunning return of 23 goals in as many games. To put that in perspective among his peers, VfL Bochum’s Lukas Hinterseer and Erzgebirge Aue’s Pascal Testroet are his nearest challengers in the scoring charts with 13 goals apiece.

Three-time Bundesliga champions Hamburg suffered the same fate as Köln in 2017/18, but are now in pursuit of their first ever Bundesliga 2 title to limit their stay outside the top tier to just 12 months.

In coach Hannes Wolf, Hamburg have a man at the helm with previous Bundesliga 2 success, having steered VfB Stuttgart to first place in 2016/17; his first year in charge of a senior team.

Between them, Köln and Hamburg have held top spot for 22 of the 24 Matchdays so far, but it is by no means a two-horse race; there are another five teams below them with realistic title aspirations.

1. FC Union Berlin have managed to keep pace with the top-two, sitting in third for 15 weeks to date and currently trail Köln by just four points.

At the heart of Union’s success has been the league’s best defence, coach Urs Fischer’s side conceding just 21 goals and keeping 10 clean sheets thus far. Summer recruits Florian Hübner and Rafal Gikiewicz have been key to the success, with the former thriving on more regular first-team opportunities in central defence since making the switch from Hannover 96.

Meanwhile, Gikiewicz has been superb since arriving from SC Freiburg, and to many his 10 clean sheets between the posts will not even be his most memorable contributions. Instead, that particular honour goes to his dramatic 90th-minute equaliser in the 1-1 draw with 1. FC Heidenheim back in October. 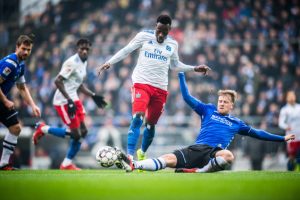 Paired with the fourth-best attack in the division, Union’s formidable defence puts the Berlin club on the brink of history and what would be a maiden promotion to the Bundesliga. Their home game against Hamburg on Matchday 31 has the potential to play a major part in deciding the championship.

Yet while Köln, Hamburg and Union respectively hold the two automatic promotion places and the promotion/relegation play-off berth – where third in Bundesliga 2 takes on 16th in the Bundesliga for the right to play in the top flight in 2019/20 – there are four teams behind them that are by no means out of the running.

Their chances may be somewhat slimmer, but FC St. Pauli certainly won’t feel out of contention, just five points adrift of Köln. They could have been even closer to the pace setters if not for three defeats in their past six games, but a 1-0 win over SC Paderborn on Matchday 24 has restored optimism ahead of a potentially decisive meeting with neighbours Hamburg on Matchday 25.

One behind the top-four pace in fifth and sixth respectively, both Holstein Kiel and 1. FC Heidenheim also know that a nine-point gap is by no means insurmountable, should they put together a run of victories and results elsewhere go their way.

Kiel and Heidenheim have been superb on their travels this season, their respective returns of 19 and 18 points on the road putting them among the best in the division.

And rule out SC Paderborn at your peril. They may be seventh, 10 points behind leaders Köln, but they are the league’s second-highest goalscorers after the Billy Goats with a remarkable 54 in 24 games.

Furthermore, their haul of 24 points from 13 home games is only bettered by Union’s 28 from 12 on their own patch. Should they both maintain that kind of superiority at home and improve on their away form, then they could well be in contention come Matchday 34.

There is still a long way to go until then, of course, but with several head-to-heads among the top seven on the fixture list before the season is out, the race for the Bundesliga 2 title and promotion to the top tier promises to go down to the wire.