The race to become the 2018/19 Bundesliga champion looks set to go down to the wire in what has been one of the most engaging campaigns in years. History suggests anything can happen as the pressure of the title challenge draws to a climax.

One man who knows a thing or two about a run-in having coached Dortmund to two Bundesliga titles and Bayern to five, is Ottmar Hitzfeld. His simple and honest assessment: “The title race between Borussia Dortmund and FC Bayern München will stay exciting right to the end.” 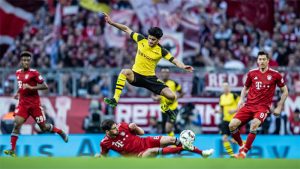 That the veteran tactician is just as enthused as everyone else by the sight at the top of the Bundesliga table is a good indication of just how gripping the 2018/19 finale is. With three matches – just 270 minutes of football – left in the season, an ever-so-bridgeable gap of two points is all that divides leaders Bayern from pursuers Dortmund.

“The calculation is relatively simple, you don’t need to have studied Advanced Mathematics,” explained Bayern coach Niko Kovac. “We have to pick up seven points if BVB take everything from their last three matches.”

You also do not need to be Albert Einstein to work out that scenario would leave both teams level on points at the top of the table, but the ace up Kovac’s sleeve is another statistic: Bayern currently have a +16 better goal difference than their rivals, and no algebra expert is needed to explain that is a trump card.

But there could be banana skins on route as both clubs still have fixtures to play that look as tricky on paper as they no doubt will prove on the pitch.

Bayern’s 28th title of the Bundesliga era hinges on encounters with Hannover 96, RB Leipzig and Eintracht Frankfurt with the first and last of those games at their formidable Allianz Arena; Dortmund have away trips to Werder Bremen and Borussia Mönchengladbach sandwiching their final game at the Signal Iduna Park this season, with Fortuna Düsseldorf the visitors.

A repeat of the results from the first half of the season would see Bayern claim maximum points while Dortmund – surprisingly beaten by Fortuna Düsseldorf just before Christmas – would take just six, but the circumstances are now different: the top two are not the only ones with something to play for.

SV Werder Bremen remain in the hunt for European football with a top-seven finish, and Gladbach are pushing Frankfurt for fourth and a place in the UEFA Champions League; Leipzig have already secured that, but still have a mathematical chance of winning the title should Bayern and Dortmund self-destruct. 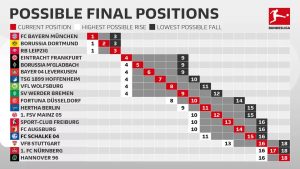 So, who’ll come out on top?

“With [Robert] Lewandowski, [Serge] Gnabry or [Kingsley] Coman, Bayern simply have more weapons than Dortmund,” is how former FCB star Stefan Effenberg, who won three titles under Hitzfeld, sees it. That he mentions the name of Bayern’s prolific Pole first is no coincidence either. Lewandowski’s league-high 21 goals – four more than the chasing pack – have been the fuel for Bayern’s title tilt. Averaging a strike every 128 Bundesliga minutes this season, the 30-year-old should – mathematically speaking – find the net at least twice more this season, and in the 84 previous matches in which he has done so, Bayern have won 77 times and lost just once.

Dortmund’s inspirational captain Marco Reus will miss his team’s next two matches following his Revierderby red, but Effenberg himself believes ex-Bayern man Mario Götze “could decide the title” for the Ruhr Valley giants, while Jadon Sancho’s 14 assists this season means he is outstripping even Lionel Messi as well as everyone else across Europe’s top five leagues in that regard.

In Paco Alcacer, four goals behind Lewandowski alongside Frankfurt’s Luka Jovic, Dortmund have a man who has forged a reputation for the last-gasp winner. Lucien Favre’s men have netted 24 goals in the last 15 minutes of league matches this term, 12 from their Spanish forward – if it does go down to the wire as Hitzfeld predicts, who better to have in your side?

Hitzfeld knows from experience how things can change literally in the final seconds of the season as they did for his Bayern side in 2000/01 when – with FC Schalke 04 already celebrating what they thought was a first Bundesliga title – Patrik Andersson rifled home a free-kick in Hamburg to snatch it away from them. Dortmund can point to their own miracle from the following campaign when Matthias Sammer’s men overhauled Bayer 04 Leverkusen, closing a whopping five-point deficit in the final three games.

Those achievements required perseverance, luck and the predictable unpredictability of football. Kovac joined Bayern as a player in summer 2001 having been a Hamburger SV man on the day of Andersson’s heroics, so there is no need to warn him of the potential pitfalls ahead. “You have seen there have been some crazy results in the last few weeks, and there will also probably be some more in the next three games,” he explained. “In the run-in, there are results that no-one expects.” With that in mind, pick a winner if you dare…

Which team do you support at the UEFA #EURO2021? I

Congratulations and all the best Simone Inzaghi fo

All the best to the @indianfootball team for tonig

Early morning walk through the wildlife reserve in

Which team do you support at the UEFA #EURO2021? I

Congratulations and all the best Simone Inzaghi fo

All the best to the @indianfootball team for tonig

Early morning walk through the wildlife reserve in