SGS Essen have won their final home game of the 2018/19 Allianz Frauen-Bundesliga (Women’s Bundesliga) season on Sunday. Essen registered a 3-0 win against bottom-placed Borussia Mönchengladbach at the Stadion Essen.

The final home game of the season turned into an emotional affair as the club bidded farewell to their players Linda Dallmann, Sarah Freutel and Isabel Hochstein, head coach Daniel Kraus and general manager Philipp Symanzik before kick-off. Dallmann will join league rivals FC Bayern Munich at the beginning of the new season, while Isabel Hochstein moves on to rivals MSV Duisburg. Essen-born Freutel will retire from professional football after spending eleven years at SGS Essen. Head coach Daniel Kraus will take over the reigns at Women’s Bundesliga SC Freiburg. 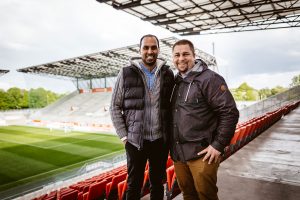 SGS Essen were clear favourites against Borussia Mönchengladbach. The visitors have already relegated to the 2nd Division Women’s Bundesliga, while Essen remains in contention to finish 3rd. But somehow the home team had difficulties to settle and to execute their game plan.

Ramona Petzelberger finally broke the deadlock in the 40th minute, when she slotted home past Borussia’s goalkeeper Lisa Venrath and secured Essen a 1-0 lead at half-time.

Essen looked much more focused in the second half but it needed a Hollywood-like climax to seal the much-expected win: Sarah Freutel came on as substiute for Danica Wu in the 57th minute and found the back of the net in the very next minute with her pretty much first touch of the ball.

The 2-0 lead made the home side feel much more comfortable. A lay-off by Turid Knaak found Freutel who calmly increased the lead with her second goal of the match in the 82nd minute.

Freutel was even unlucky not to score a hat-trick in the dying moments of the match, which would have been most probably too much of a good thing.

SGS Essen are now placed 4th in the Women’s Bundesliga with 41 points to their name, while Turbine Potsdam remain 3rd with 42 points.

Meanwhile, defending champions VfL Wolsburg have retained the Women’s Bundesliga title after a 1-0 away win at TSG 1899 Hoffenheim yesterday. Wolfsburg top the standings with 56 points, while FC Bayern Munich remains 2nd with 49 points.

The final matchday of the season will take place on Sunday, May 12. Turbine Potsdam travel to Wolfsburg for their final game, while Bayer 04 Leverkusen play host to SGS Essen.