Saturday 29 August 2009 will go down in history as the beginning of an eminent chapter in the history of FC Bayern München, marking the first day Arjen Robben and Franck Ribéry took to the field together in the club’s historic colours.

On that day, Bayern – winless after three games – picked up their opening victory of the campaign courtesy of a 3-0 win over VfL Wolfsburg that marked the beginning of the Robbery era.

Leading 1-0, Bayern coach Louis van Gaal first sent on his Dutch compatriot Robben and then Frenchman Ribery, who set up his new partner in crime for a dream debut goal five minutes into the Robbery’s life. The same combination put the finishing touches to the win and announced their partnership to the Allianz Arena in emphatic fashion.

The rest, as they say, is history; they’ve been picking the pockets of Bundesliga defenders and raiding their opposition ever since.

And, with two matchdays remaining in the 2018/19 season, the pair are ready and raring to bow out in style.

“I can’t really describe it,” Robben told bundesliga.com after featuring for the first time since November in Matchday 32’s 3-1 win over Hannover 96. “I’m just really, really thankful. It’s the only word that I can think of: thankful! I’ve done everything to get here.”

Germany’s 2010 Player of the Year sits tantalisingly on 199 Bundesliga appearances and 98 Bundesliga goals, two landmarks waiting to be reached before the flying Dutchman waves goodbye to Germany’s top-flight.

While Robben’s departure at the end of the season has been known for some time, Ribery only confirmed his exit this week. It prompted Bayern CEO Karl-Heinz Rummenigge to lavish praise on both men ahead of “a worthy, emotional send-off.” 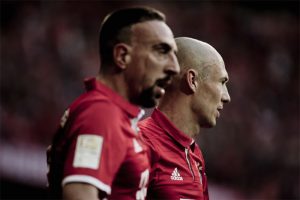 “Franck and Arjen are outstanding players and Bayern have a lot to thank them for,” said Rummenigge. “They’ve defined the most successful decade in Bayern’s history with their fantastic football.”

Since being partnered in Bavaria, Robbery have stolen the show as Bayern have claimed no fewer than seven Bundesliga titles, four DFB Cups and one UEFA Champions League trophy over a memorable decade.

When together, Bayern have looted their opponents with 87 wins from 113 Bundesliga outings and the Robbery one-two has directly led to 28 goals, with Robben the benefactor of Ribery’s provision no less than 23 times and Robben returning the favour on a further five occasions.

After 12 years in Munich, Ribery is understandably emotional upon leaving the club but is already eyeing a role upstairs, saying he will “definitely be coming back to Munich – 100 per cent.”

“After 12 years, it’s hard for me, but also for the fans. But we must not forget what we’ve done together. Danke schön,” said the French winger, whose importance at Bayern was perfectly surmised by Robben; “If we want to win titles, we need Ribery.”

And they have done just that. Ribery could become Bayern’s, and the Bundesliga’s, record title-winner by lifting a ninth Meisterschale this season, while Robben would join Oliver Kahn, Philipp Lahm, Bastian Schweinsteiger and Mehmet Scholl on eight.

With a DFB Cup showdown with RB Leipzig still to play before the sun sets on the pair’s time in Bavaria, Ribery has his sights firmly set on bowing out with yet more silverware to squeeze into his luggage when he continues onwards on his football journey.

“I hope to win the Bundesliga and the DFB Cup this year, that would be nice for me, for my family and of course also for the fans. It was always an honour to wear this shirt,” he said.

You certainly wouldn’t put it beyond these two Bundesliga greats to help deliver a fitting finale with one last Robbery – although given their influence, they wouldn’t be stealing titles in the slightest.

All the best @robinduttofficial for your new assig

The #SuperLeague is a devastating signal! It will

Congrats to @fsvguetersloh2009 who continue to imp

All the best @robinduttofficial for your new assig

The #SuperLeague is a devastating signal! It will

Congrats to @fsvguetersloh2009 who continue to imp