DERBYSTAR presented the official match ball of the Bundesliga and Bundesliga 2 for the upcoming 2020-21 season today. In contrast to the designs for the previous two seasons, DERBYSTAR has opted for a design that features two striking colours for the 2020-21 season. 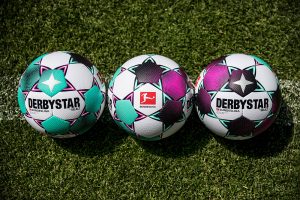 The official Bundesliga match ball by DERBYSTAR for the 2020-21 season. (Photo courtesy: DERBYSTAR)

In addition to the visual aspect of the new design, the 3D structure on the material surface is intended to make for an even more stable trajectory and precise ball control as well as to optimise grip for goalkeepers. Thanks to the special white panels, the match ball is easy to see for players and spectators alike, especially under LED light.

DERBYSTAR has been the official match ball partner of the Bundesliga and Bundesliga 2 since the 2018-19 season. The cooperation between the DFL and the internationally recognised, long-standing brand is initially scheduled to last until 2021-22.

Back in the 1970-71 season, DERBYSTAR was present in the Bundesliga as a result of numerous club partnerships. In the 1979-80 season, all 306 Bundesliga matches were played with balls made by DERBYSTAR. DERBYSTAR is part of the SELECT Sport Group.

Throwback 2008: Sightseeing Tour in Bavaria with @

Germany's cup final Saturday will kick off at the

Throwback 2008: Sightseeing Tour in Bavaria with @

Germany's cup final Saturday will kick off at the