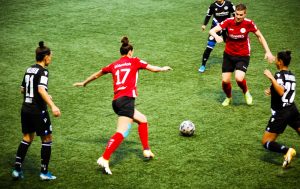 The cup match, which was also a derby, was expected to be a closely contested affair, but the home side turned out too good for Bielefeld. The game was the first competitive match of the 2020/21 season for both sides. 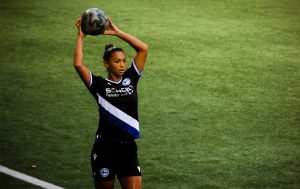 The match kicked-off with both sides having their difficulties in the build-up. Left-back Melissa Schulz opened the score sheet for Gütersloh in the 22nd minute, but Bielefeld scored the equalisier nine minutes later when 16-year-old Maja Sternad found the back of the net with a deflected long-range shot.

But Gütersloh quickly responded with another goal in the 34th minute. Young talent Celina Baum forced an error in the Bielefeld defence and took advantage of the situation, while putting the ball past on-rushing Bielefeld goalkeeper Lisa Venrath.

Gütersloh went into the half-time break with a 2-1 lead and came back from the breather with an impressive display of team work and a clinical finish. 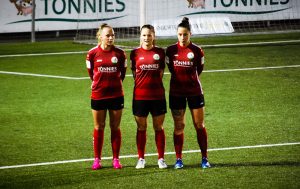 Germany youth international Anna Aehling (48′) and experienced Shpresa Aradini (69′) increased the lead as Bielefeld looked tired and knocked out. Pauline Berning (74′) added another goal to complete Bielefeld’s misery and to secure the home side a 5-1 win against their archrivals.

Both teams will meet once again in just two weeks time when they face each other in a 2nd Division Women’s Bundesliga game at the Tönnies-Arena.

Please click here to view a few pictures from my visit to the match.

A painful defeat on penalties against @hsvfrauen.d

A painful defeat on penalties against @hsvfrauen.d