FSV Gütersloh 2009 have stunned Women’s Bundesliga side SGS Essen in a closed-door Women’s DFB-Pokal (DFB-Pokal der Frauen) Round 2 match on Saturday evening, when the 2nd Divison side registered a 3-2 win at the Tönnies-Arena in Rheda-Wiedenbrück. The match ended in a 2-2 draw after 90 minutes just to witness an extra-time winner by Paula Reimann.

SGS Essen went into the encounter as top favourites, but they were well aware of the fact that they had to face a tough challenge against Gütersloh. Gütersloh, who are placed second in the 2nd Division table, awaited Essen with a great fighting and team spirit.

Nevertheless, Essen opened the score sheet in the 32nd minute when Nicole Anyomi took advantage of an goalkeeping blunder by FSV’s Isabell Mischke. Mischke failed to catch a cross properly, while Anyomi was the quickest one to react and put the ball into the open goal.

Gütersloh continued to put some pressure on Essen despite the narrow deficit, but the visitors managed to keep the advantage on their side until the half-time break.

Former SGS Essen player Annalena Rieke levelled the score line in the 47th minute to give the home side a momentum, while second half substitute Shpresa Aradini gave Gütersloh the lead in the 75th minute. 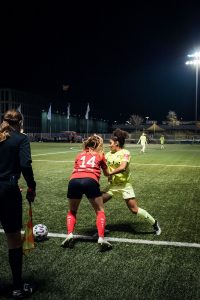 Essen increased the pressure on on the home side and Gütersloh were lucky not to concede a goal as Anyomi failed to convert several chances to keep her side in the game. But the young Germany striker finally scored the equaliser in the 88th minute and it seemed like the favourites were up to change the fortunes of the game with minutes left on the clock.

Referee Nadine Westerhoff blew the whistle after a few minutes of injury time and the match headed into an extra-time on a cold October evening.

One could feel that there is a surprise to be in the wind, as Gütersloh didn’t look downhearted after the late equalisier. And the feeling turned into reality: Paula Reimann scored the winner for FSV Gütersloh in the 107th minute.

Essen tried their best to bounce back once again, but the strong FSV backline led by captain Melanie Schuster had an excellent day in office and secured the 2nd Division side a 3-2 win and a spot in the Round of 16 scheduled to take place on December 5/6.

🇬🇧 I'm delighted to officially announce my a