Similar to the Qualifiers, the upcoming campaign will be played across 4 stadias in Kolkata and Kalyani, under the bio-secure bubble for the teams and organizers owing to the COVID-19 pandemic. With the length of the competition and number of teams increasing significantly as compared to the qualifiers, AIFF Leagues CEO Mr. Sunando Dhar stressed on the importance of “teamwork and cooperation” in making the organization of the Hero I-League a success.

“With the number of teams going up from five to 11 and the number of days from 25 to 100 (in comparison to the Hero I-League Qualifiers), the maintenance of the bio-bubble and coordination between the teams and organizers will be critical,” Mr. Dhar said.

“Cooperation from the participating sides is vital to maintain the bio-bubble and in order to ensure a successful event, all parties have to come together in a team effort and move forward together,” he added. 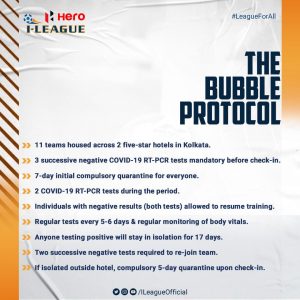 The teams began checking-in to their respective hotels and entering the bio-secure bubble from December 26 onwards, after which they immediately began their period of seven days of mandatory quarantine.

Prior to their check-in, each member in every team has to have three successive negative COVID-19 RT-PCR tests, the samples of which have to be taken ten, six and two days prior to them entering the bubble. After checking in, the teams will be tested on the second and fifth day after them entering the bubble, followed by regular tests every 5-6 days and regular monitoring of body vitals.

Each team has been allocated a total of 20 rooms in the hotel, with the addition of a separate medical/physio room for every side. For their quarantine, a comprehensive list of dos-and-don’ts has been given to each team as well.

The housekeeping staff attending to the rooms will also be a part of the same bio-bubble and will be tested on a regular basis every 3-4 days. Other support staff such as drivers, security personnel and other hotel staff will also be tested regularly.

Meals were provided to the rooms during the quarantine period and after that, players and staff members with negative test results can begin gym and outdoor training sessions. A comprehensive schedule consisting of the meals (four-times-a-day), gym and training timing and venues will be prepared on a weekly basis in coordination with the teams, while ensuring that all the safety norms of the bubble are followed with regards to security, movement and sanitization.

In order to maintain the bubble, dedicated pathways and elevators have been demarcated along with signage and security at entry and exit points. For dining halls, there is another set of detailed procedures and protocols to ensure minimum contact and maximum safety, such as the partition of halls, regular sanitization.

“Safety of all players and officials is our top-most priority and there can never be any compromises in that regard. The medical protocols and SOPs has been framed by the AIFF, in consultation with various medical experts and COVID-19 safety guidelines framed by the World Health Organization (WHO), Ministry of Health and Family Welfare, AFC and State Government of West Bengal, etc,” Mr. Dhar informed.

In case of a positive test result for any team member, he or she will have to undergo a 17-day period of quarantine – either in the same hotel on a different floor, or in an outside facility.

In order to re-join the bubble, the person has to have two successive negative RT-PCR tests. However, if the individual was in isolation outside the hotel, he/she needs to undergo a compulsory 5-day quarantine in the hotel upon check-in for him/her to rejoin his team.

A new additional feature from the Hero I-League Qualifiers is that each team has to assign a minimum of one ‘outside-bubble’ member, who would be the club’s ‘connection’ to everything outside the bio-bubble.

Mr. Dhar explained: “One room has been allotted outside the bubble to each team and it is mandatory for them to have at least one person assigned who will keep them in touch with the outside world and have duties such as organizing transport, managing the equipment, collecting and sending couriers, etc.”

“I thank the IFA (Indian Football Association) — our local association, and the West Bengal government for their continuous support. Hosting and organizing the Hero I-League Qualifiers would not have been possible without the combined efforts of all three parties, and now we look forward to a successful Hero I-League as well,” the League CEO expressed.

The Hero I-League kicks-off on January 9, 2021 with a mouth-watering triple-header as debutants Sudeva Delhi FC take on newly-promoted Mohammedan SC at the iconic Vivekananda Yuba Bharati Krirangan on the day. In the other two matches, RoundGlass Punjab FC face Aizawl FC and Gokulam Kerala FC going up against Chennai City FC at the Kalyani Municipal Stadium.

The matches will be broadcast live on 1Sports and streamed live on social media/OTT platforms.