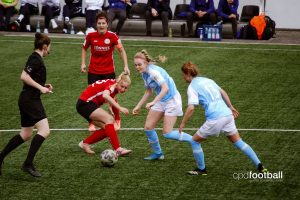 The home side opened the score sheet in the 7th minute when Annalena Rieke headed the ball past Bocholt’s goalkeeper Lara Wigger following a free-kick by Melanie Schuster.

The goal could have made things easier for Gütersloh, but the game developed into a closely-contested affair as both sides aimed to somehow get control of the match.

Bocholt levelled the score line in the second half out of nowhere as Jolina Opladen’s free-kick caught Gütersloh goalkeeper Sarah Rolle flat-footed. The ball went into the back of the net to give the visitors a ray of hope. 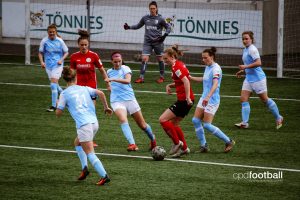 But Gütersloh kept calm and restored the margin in the 77th minute. A Paula Reimann cross found an unmarked Rieke in the box and the in-form striker put another successful header past Wigger.

Late substitute Melissa Schulz sealed Gütersloh’s win with a perfect shot from the edge of the box in the dying moments of the match.

Gütersloh remain at the top of the table with 19 points from eight matches. FC Carl Zeiss Jena have climbed to 2nd spot following a 3-1 win against RB Leipzig, who are now ranked 3rd.