German Women’s 2nd Division side FSV Gütersloh 2009 is delighted to announce it new coaching staff for the 2022/23 season: Britta Hainke, Sammy Messalkhi and Katrin Lückel will be in charge of the FSV Gütersloh First Team. Marcell Rosa will be the new kit manager. 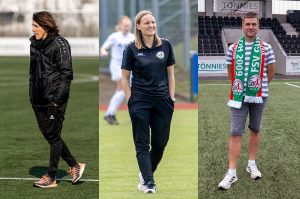 Sammy Messalkhi will join the club as a coach and support head coach Britta Hainke. Katrin Lückel will be the assistant coach. The 41-year-old Messalkhi has previously worked for Borussia Bocholt in various capacities including head coach of the women’s first team in the 2nd Division Women’s Bundesliga.

“We are happy to present a highly qualified coaching team for the upcoming season with Britta Hainke, Sammy Messalkhi and Katrin Lückel. Britta and Katrin know the club and its environment down to the last detail since they have been with us for many years now. Sammy will be new to the club, and he will be a great addition with new ideas,” said FSV Managing Director Michael Horstkötter.

“The coaching staff will be well positioned for the new season. Each of us has different strengths, which we would like to create an even better quality for FSV. We will set an example of team spirit to transfer it our player and to create an unit,” said Head Coach Britta Hainke.