FIFA and the Local Organising Committee (LOC) of the FIFA U-17 Women’s World Cup India 2022™ have officially announced the schedule for the biennial youth tournament and Bhubaneswar is set to host India’s group stage matches beginning 11th October, while Goa has been awarded both semi-finals. Meanwhile, the showpiece game is set to be played in Navi Mumbai on 30th October.

The Kalinga Stadium in Bhubaneswar will see hosts India compete in all three group stage games on 11th, 14th and 17th October 2022. Meanwhile, the DY Patil Stadium in Navi Mumbai and the Pandit Jawaharlal Nehru Stadium in Fatorda, Goa will equally share the four quarterfinal games.

Extending their gratitude to all stakeholders, LOC Project Directors, Ankush Arora and Nandini Arora, in a joint statement said, “We are extremely grateful to FIFA, our host states and all other stakeholders for their continued support in the aligned vision of uplifting women’s football.

“The launch of the schedule is a significant moment on the road to the historic tournament. The preparations for hosting India’s second FIFA competition are progressing as per timelines and we remain confident of delivering a highly successful tournament, one which will provide a platform for future stars of women’s football to shine.”

A total of 32 games contested by 16 teams will decide the winner of the seventh edition of the biennial youth tournament over 10 matchdays, with each venue hosting double headers on each matchday. All participating nations now eagerly await the Official Draw on 24th June to find out their definitive path to lifting this coveted trophy in Navi Mumbai.

On the back of the successful FIFA U-17 World Cup 2017, which broke the record for being FIFA’s most attended youth World Cup ever, India 2022 is carrying on the positive legacy. This youth tournament has touched the lives of 2500 children through its Kick Off The Dream™ Football Carnivals, which aim at encouraging gender-inclusive participation. Promoting women in leadership, the LOC has also equipped the Indian footballing ecosystem with 162 female coaches in the grassroots through its legacy initiative, the Coach Education Scholarship Programme. Further editions of both, the coaching programme and the football carnival, are planned in the lead up to the 11th October kick off. 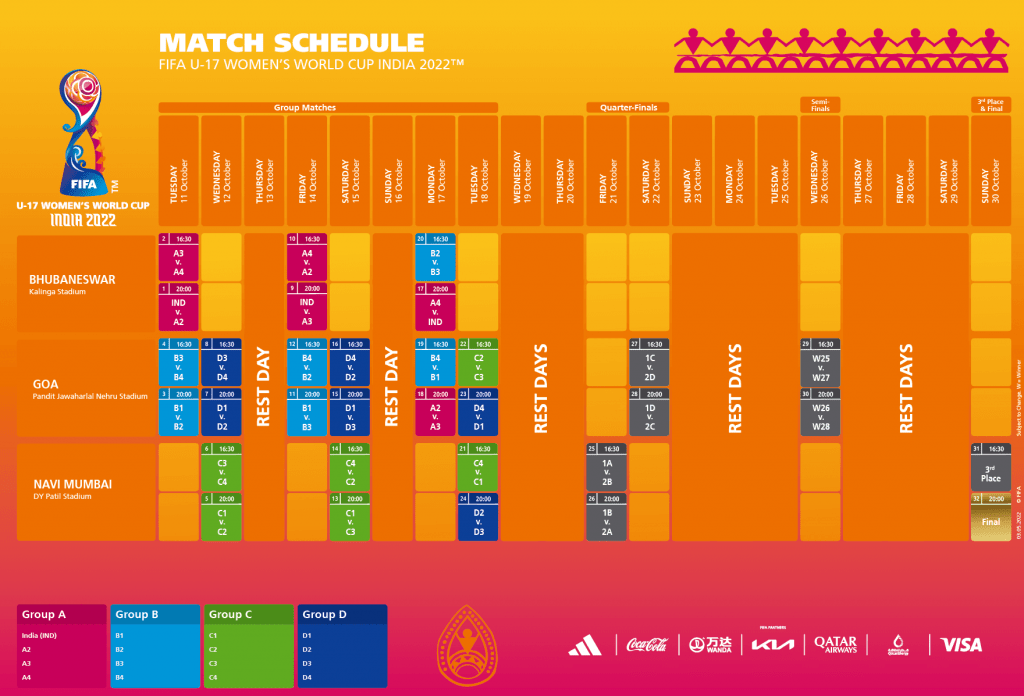