Nike Japan have introduced new 2014 home and away football kits for 2012 and 2013 consecutive J-League champions Sanfrecce Hiroshima, as well as for the Urawa Red Diamonds and the Kashima Antlers.

The kits are made from innovative, environmentally friendly recycled polyester chosen for its high ratings in breathability, stretch and durability, and feature unique design details tailored to each team. 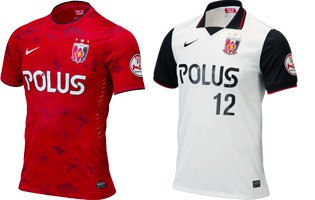 The home kit features the club’s traditional color combination of red, white and black, while adopting an unconventional camouflage pattern that symbolically protects the player while threatening opponents. The jersey also incorporates various elements such as “Heart 12,” a heart-shaped graphic combined with the number 12, representing the strong connection between the club and its supporters or so-called “12th player.” A bat-like shape represents former Urawa City, the team’s hometown. The club’s iconic color, Urawa Red, is also used for the shorts and socks.

The theme for the away kit is modern classic, featuring bold use of white and black blocking as well as a stylish collar. The team’s symbolic red is applied as a single stripe on the black collar, that same black being used on the entire sleeves for the first time in the team’s history. 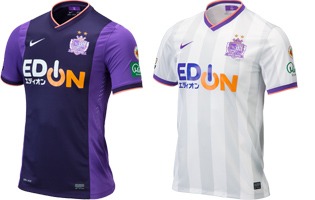 The home jersey’s dynamic design of the current J-League champion is inspired by the majestic but graceful Torii gate of the Itsukushima Shinto Shrine near the city of Hiroshima. The jersey makes a powerful impression with an updated color scheme of deep violet, while the traditional Sanfrecce Violet is used as a secondary color. Accent color fluorescent melon is inspired by the vermilion-lacquered buildings of Itsukushima Shrine and pays respect to its history and culture.

The away kit design, inspired by the floor of Itsukushima Shrine’s cloister, looks simple and clean with its white and gray stripes, while Sanfrecce Violet and fluorescent vermilion are used as accent colors on the ribs around the collar and cuffs. 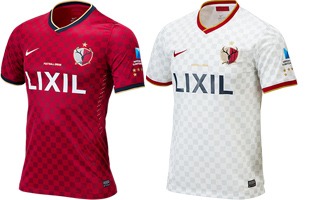 The home kit adopts the traditional color combination of red and navy and features a gingham design on the entire shirt, inspired by the back pattern of the deer, the symbolic animal of Kashima Shinto Shrine. The striking Percy Red shade relates to the rose, the Ibaraki prefectural flower, while navy symbolizes the dynamic ocean surrounding Kashima. Gold is used as an accent color to express the team’s dominating strength, while a V-shaped collar is adopted for the first time by the club to represent victory as well as the team’s pride and history.

The away jersey also features a clean gingham check pattern in white and gray, white being the lucky color for Antlers: among the 16 titles that they have won so far, five out of six recent titles were decided when the team was playing in a white-base kit. The design of the shorts and socks are kept purposefully simple to reinforce the top’s gingham check pattern.

#WeCallItTopspiel. Waiting for our match against @

Congratulations to our U-17 team on an important 2

Kudos to the #India women’s national team for a

Best wishes to the #India WNT for the historic mat

#WeCallItTopspiel. Waiting for our match against @

Congratulations to our U-17 team on an important 2

Kudos to the #India women’s national team for a

Best wishes to the #India WNT for the historic mat