The ticket prices for the FIFA Confederations Cup 2017 and the 2018 FIFA World Cup were announced in Moscow yesterday following a Local Organising Committee (LOC) board meeting with FIFA participation. As for the South Africa and Brazil FIFA World Cups held in 2010 and 2014, a special category has been reserved for residents of the host country, who will be able to apply for FIFA Confederations Cup Russia group-match tickets starting at RUB 960. At least 100,000 tickets will be available in this specific category 4 for the “Tournament of Champions”, taking place from 17 June to 2 July 2017. The remaining ticket categories are priced from USD 70 to 245.

For the 2018 FIFA World Cup, domestic residents will have access to at least 350,000 tickets in category 4, with prices starting from RUB 1,280. Tickets available to all football fans in the remaining categories will be on sale from 105 USD upwards.

“We wanted to make sure that we priced tickets fairly to make the events accessible to as many people as possible. We therefore conducted thorough market research and have priced the tickets accordingly. The teams that have qualified to date for the ‘Tournament of Champions’ promise a great football festival here in Russia next year,” said FIFA Secretary General Fatma Samoura, who was in Moscow for her first working visit to the hosts.

Ticket sales for fans wishing to attend the FIFA Confederations Cup will begin with a VISA exclusive pre-sales phase running from 8 to 17 November 2016. The first sales phase will then start on 1 December, five days after the Official Draw in Kazan.

Russia, Germany, Australia, Chile, Mexico and New Zealand have already qualified, while the winners of UEFA EURO 2016 – or the runners-up should world champions Germany win – are also guaranteed a spot. The eighth and final participant will be decided in January at the conclusion of the 2017 CAF Africa Cup of Nations, when the full Russia 2017 match schedule will be known.

For the FIFA Confederations Cup 2017, fans will be able to apply not only for individual match tickets, but also for ticket series for a specific host city. As well as those two options, fans wishing to follow their country at the 2018 FIFA World Cup will also be able to apply for team-specific ticket series.

Fans will shortly find all relevant information, including the ticket price list and a FAQ document, on FIFA.com/tickets. To ensure that they do not miss out on anything, fans will also soon be able to sign up for ticketing information in the form of a newsletter.

Ticket sales for the FIFA World Cup will only begin after next year’s FIFA Confederations Cup. For both tournaments, tickets will be available for purchase by the general public exclusively on FIFA.com.

Please click on the images below for more details… 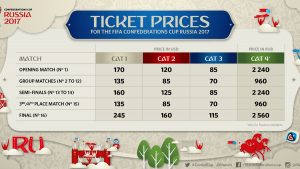 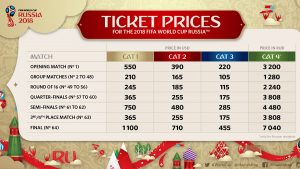