The UEFA Champions League brand for the 2018/19 season has a vibrant new look, based on a concept called ‘Highlighting moments that make the ultimate stage’.

The branding has been designed to be more flexible, while building on established elements such as the anthem, the stadium and the trophy. The blue colour palette deriving from UEFA Champions League matchnights has been enriched with new accent colours – magenta and cyan – to support the fresher look.

The new identity visually expresses the refined UEFA Champions League brand positioning. It consolidates the core brand values that the competition is known for, while highlighting the leading role it plays in football. The UEFA Champions League has expanded to become part of the global entertainment environment, rather than just solely being a sports event.

Guy-Laurent Epstein, marketing director, UEFA Events SA: “The UEFA Champions League is a globally recognised brand in football, sports and entertainment. This brand refresh maximises the opportunities to engage with fans and stakeholders across new technologies and platforms.” 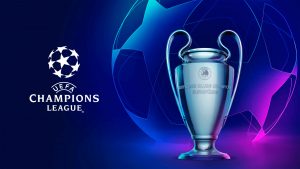 The refined brand identity has been created to support digital, mobile and social media platforms. The new assets allow for an easier, scalable brand integration (from soft to full branding) on smaller surfaces and mobile devices. The level of detail on the ‘ultimate stage’ stadium and ‘starball’ visuals has been enhanced to cater for a richer ultra-high-definition television experience. This will ensure that the brand remains relevant and engaging for fans and will enable them to interact with it, as technology and content platforms develop.

UEFA revisits its competition brand identity every three years, in sync with the commercial cycle of broadcast and sponsorship rights. Compared with previous brand identity updates, the new design is a greater leap forward. While the ‘starball’ visual gains importance in the new identity, the distinct and successful ‘ultimate stage’ arena still features in the branding package. This provides an extended range of key visuals that can be used for communication purposes, both internally as well as by UEFA’s partners.

Mark Hyde, head of design, BT Sport: “Confident, contemporary and courageous. With refined elegance and a vibrant injection of colour, the UEFA Champions League brand upholds its position as possibly the most iconic of sporting identities.”

The new identity has been designed to support a large range of stakeholders such as sponsors, broadcasters, licensees and clubs. A new, more flexible colour co-branding system has been introduced to give commercial partners the opportunity to tailor the brand identity to their own needs, while ensuring consistency of the look and feel across multiple touch points.

The new brand identity will continue to afford the UEFA Champions League a unique branding that will be applied across a wide range of promotional applications, with the objective of further enhancing the prestige of one of the world’s biggest sporting competitions.

The identity has been developed in collaboration with UEFA’s marketing partner, TEAM Marketing AG, and the London-based creative agency DesignStudio.