Another highly sought-after talent has decided to join Borussia Dortmund: 17-year-old Jude Bellingham will move from Birmingham City FC to the Black and Yellows from the German Ruhr Valley. The young Englishman has signed a long-term deal with his new club and, despite his young age, will join their first team squad from day one. 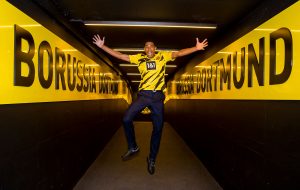 By adding Bellingham, the list of top-level talent who see BVB as the ideal place for their personal development at highest level while adding value to the team right away just gets longer. “Jude Bellingham has decided with absolute confidence to pursue his career at Borussia Dortmund. The primary motivation behind his decision were the prospects on the pitch we were able to offer him”, said Dortmund’s sporting director, Michael Zorc, adding: “He has enormous potential, which we will continue to develop together with him over the coming years. He already boasts astonishing quality with and without the ball, and has a strong mentality to boot. Jude will immediately strengthen our first team squad, but we will certainly give him all the time he needs to adapt to the higher level of play.”

Bellingham, who also plays for England’s under-17 national team (3 caps, 2 goals), is about to finish a long season in the Championship, in which he has contributed 4 goals and 3 assists from midfield in his 40 appearances. “I can’t thank Birmingham City enough for what they have done for me – not just this season, but since the age of 7. Of course, I wish everyone associated with the club nothing but the best. Once a blue, always a blue. However, I’m incredibly excited to have joined one of the biggest clubs in Europe. The direction they are heading in and how much they help young players improve made it an easy decision for me personally and my family. I can’t wait to perform in front of over 80,000 fans when they are back inside one of the most beautiful stadiums in the world – hopefully as soon as possible!”

Bellingham will join up with his new team on 30 July as they prepare for the upcoming season, including a week-long training camp in Bad Ragaz, Switzerland. He will continue to wear number 22 at Borussia Dortmund. Financial terms of the deal will not be released.