In the course of the Virtual Bundesliga, the new 2020-21 season of the VBL Club Championship (VBL CC) starts on 10 November. Clubs of the Bundesliga and Bundesliga 2 take part in this competition – the search is on for the new German Club Champion in eFootball.

In its third season, the competition is being given a new tournament structure, which accommodates the increased number of clubs and promises even more excitement. The field of participants: The “North-West Division” and the “South-East Division” will each comprise 13 clubs. In each division, one first and one second leg will be played between all the clubs.

Four clubs from the final tables, the first- and second-placed teams from each division, will qualify directly for the VBL CC final. The clubs in third to sixth place in each division will also have the chance to qualify for the final in a knock-out game. On 27 and 28 March, the best eight clubs will meet in the VBL CC final, and the German Club Champion in eFootball will be crowned. 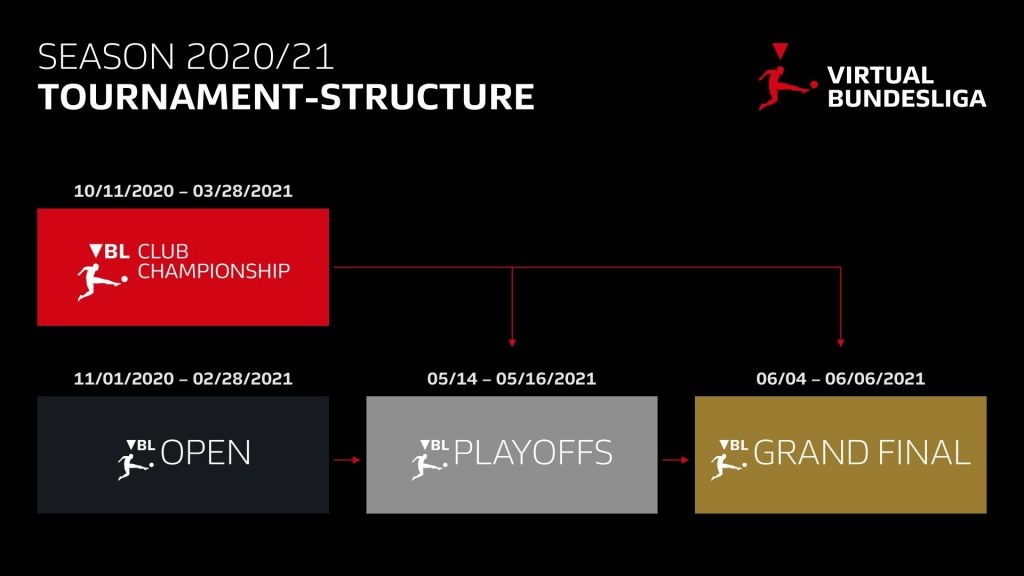 As in previous years, the clubs’ professional FIFA players can also qualify via the final tables to play in the individual player competition for the title of “German eFootball Champion”. Two players from each of the first four clubs of both divisions will qualify directly for the VBL Grand Final. Two players from each of the clubs in fifth to tenth place will take part in the VBL Playoffs, another route to potentially qualify for the VBL Grand Final. All other participants in the playoffs will qualify as individual players via the VBL Open, running from 1 November to 28 February. In each of the four months of qualification, 13 competitors per console (PlayStation 4 and Xbox One) can secure their ticket to the VBL Playoffs.

As in the previous seasons, the VBL Club Championship will be played “levelled off” – in other words, all of the players and teams will have the same aggregated player rating. This player rating will be raised from the 85 of previous year to 90, making every player and thus the game as a whole faster and trickier.

As well as two-time title-winners SV Werder Bremen, 25 other clubs from the Bundesliga and Bundesliga 2 will compete in the VBL CC. This is a record number of participants. Here is an overview:

The official calendar provides an initial overview of the dates of the 2020-21 VBL Club Championship matches. 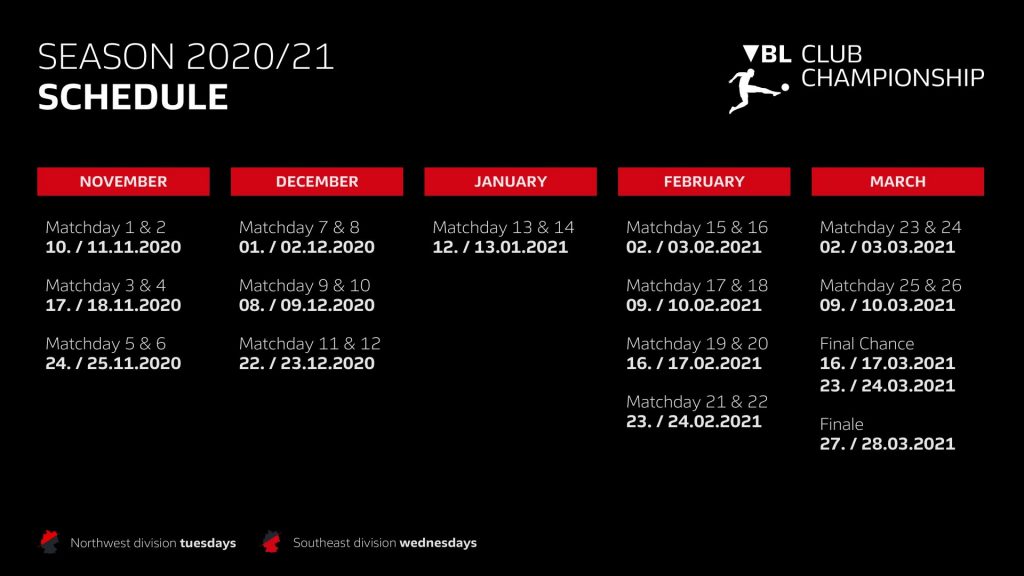 The exact fixtures and the clubs’ squads will be announced in the coming weeks.

About the Virtual Bundesliga

In 2012, the DFL became the first professional football league to have its own eSport competition when it launched the VBL in partnership with EA SPORTS. The VBL has enjoyed steadily growing popularity since its launch, with around 130,000 participants taking part last season. In 2018, the decision to launch the VBL Club Championship with the clubs of the Bundesliga and Bundesliga 2 in addition to the VBL Open competition for individual players was taken in response to the increasing popularity of the VBL, the growing relevance of eSport in general and the DFL’s focus on football simulation games. The two competitions are brought together, first in the VBL Playoffs and then in the VBL Grand Final.

Hundreds of fans gathered in front of the #Schüco

Congratulations to @mancity on winning the 2020/21

Hundreds of fans gathered in front of the #Schüco

Congratulations to @mancity on winning the 2020/21