DSC Arminia Bielefeld played host to table toppers FSV Gütersloh 2009 at the EDIMEDIEN-ARENA on Wednesday evening in a mid-week fixture of the 2nd Division Women’s Bundesliga. Gütersloh went into the match with an impressive track record of 22 points from their nine games in the on-going 2020/21 season, while Bielefeld is mired in a relegation struggle. 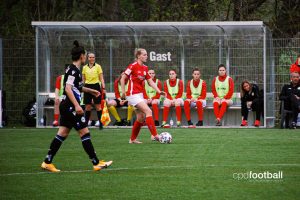 The visitors were the favourites to win the match, but both sides were well aware that the Ostwestfalen-Lippe Derby could turn out to be a closely contested affair. And indeed the match evolved to be a hard-fought contest. Gütersloh enjoyed a majority of possession in the first half but Steffen Enge’s team lacked determination and produced several unforced errors, while Bielefeld looked rock-solid in their defence.

Celina Baum failed to open the score sheet for the visitors when she found herself free in front of Bielefeld goalkeeper Lisa Venrath in the 35th minute. But Baum opted to pass the ball instead taking a free shot on target and Bielefeld quickly cleared the situation.

The hosts created a few opportunities to take the lead in the second half, while Gütersloh came out from the dressing room with the aim to win the match. But Bielefeld were denied by an in-form FSV goalkeeper Sarah Rolle who saved attempts on target by Leonora Ejupi (50′) and Maja Sternad (53′).

Gütersloh grew in confidence and Maren Tellenbröker had the chance to give her side a lead in the 63rd and 66th minute. But her attempts were saved by Venrath to keep the goalless draw. 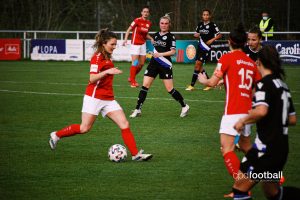 But FSV Gütersloh didn’t surrender and finally broke the deadlock in the 71st minute when Annalena Rieke found the back of the net with a fine individual masterclass. The 22-year-old striker received a pass from Demi Pagel, turned around her opposing player Grit Bender and slotted home past a helpless Venrath.

Rieke’s goal was enough for the visitors to claim their ninth win in a row and to cement their lead at the top of the league table. Gütersloh have increased their tally to 25 points from ten games and the hope to continue on their winning path when they take on 1. FFC Turbine Potsdam II at home on Sunday.

Bielefeld will face another uphill task in their next game when they travel to second-placed FC Carl Zeiss Jena. Bielefeld desperately need to collect a few more points to avoid relegation from the 2nd Division Women’s Bundesliga.