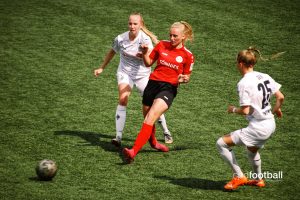 Jordanian international Sarah Abu Sabbah was the “Player of the Match” as Borussia Mönchengladbach humiliated 2nd Division Women’s Bundesliga title contenders FSV Gütersloh 2009 yesterday. The visitors registered a 5-0 away win at the Tönnies-Arena.

The Gütersloh players were all at sea after the club decided to abandon their possible promotion to the FLYERALARM Women’s Bundesliga, due to the massive financial burden for the overall operations in the top tier. One could see the disappointment amongst the players who lost their joy of playing and their superiority, which made them a serious contender to win the league title and a spot in the 2021/22 FLYERALARM Women’s Bundesliga. 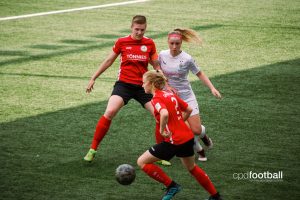 Mönchengladbach took an early advantage of the situation as Paula Petri (6′) and Sarah Abu Sabbah (12′) utilized from a mess in the FSV defence. Abu Sabbah further incresed the lead with two more goals before the half-time breather.

The Jordanian star had a brilliant game and added another goal to her tally five minutes into the second half.

FSV goalkeeper Sarah Rolle prevented her side from a even worse result with a few great saves. Paula Reimann and Melissa Schulz came close to reduce the margin in the final minutes of the game, but their attempts missed the target.