The Official Emblem of the FIFA U-17 Women’s World Cup India 2020™ was unveiled today, 2 November 2019, during a star-studded launch event at the iconic Gateway of India in Mumbai. With one year to go before the start of the tournament, fans from across India and around the world experienced the excitement and optimism as the competition’s Official Emblem was revealed to the public.

Representatives from the Local Organising Committee (LOC), FIFA and the Indian government spoke about the power of football – and youth competitions in particular – to promote positive change in society, with a focus on accessibility and gender equality. The event culminated in a spectacular outdoor light projection to reveal the Official Emblem, which was attended by a host of stars from India and the world of football.

Popular local and international stars were in attendance – including FIFA Legend Kristine Lilly, the two-time FIFA Women’s World Cup™ winner and Olympic gold medallist – as were members of India’s U-17 women’s national team, who will be competing next year to lift the trophy whose shape inspired the emblem launched today. 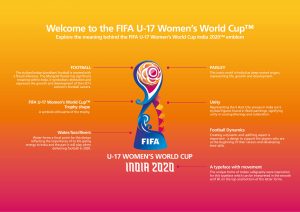 The joyful design combines dynamic and colourful elements from both the natural world and Indian culture. The bright blue waves of the base reach up along the form of the trophy towards the paisley flourish crowning the design. The droplet frames a ball made from a marigold flower, a celebratory symbol of growth and development befitting a youth competition.

The colour and style of the marigold draw inspiration from Bandhani textiles, an Indian tie-dye technique dating back thousands of years. The stem of the marigold is accented with vibrant symbols of unity and celebration derived from traditional Warli paintings, but in the bright hues found in Bandhani patterns.

Together, the components exude the tournament’s youthful energy and emphasise the potential of the upcoming event.

Speaking at the ceremony, FIFA Women’s World Cup winner and FIFA Legend Kristine Lilly said: “Today’s unveiling of the Official Emblem for the FIFA U-17 Women’s World Cup India 2020™ marks the start of an exciting journey with just one year to go until the tournament. Combining vibrant colours and elements from across Indian culture, nature and sport, this emblem brings the tournament to life and gives it a visual identity that not only aims to become a focal point and a symbol of hope for many young women and girls around the world, but will also inspire them to play football and to follow and pursue their dreams.”

“This tournament is not only a first step onto the international stage for the young women participating, it is an opportunity to inspire girls of all ages across India and around the world,” added FIFA Chief Women’s Football Officer Sarai Bareman. “The FIFA U-17 Women’s World Cup™ has huge potential to inspire positive change in society and promote gender equality. The Indian public will see talented female athletes and future role models take to the pitch next year, and I’m honoured to be here at the start of this exciting journey.”

Talking about the launch, FIFA Council member and LOC Chairman Praful Patel said: “Hosting the first FIFA tournament for women in the country will be a momentous occasion for female sport in India. We couldn’t be more thrilled to have another historic occasion for India and the All India Football Federation. With just one year to go until the FIFA U-17 Women’s World Cup India 2020™, I would like to encourage everyone in India to come out and support the tournament in numbers. We have done it for the boys before – now it is time to do it for our girls!”

🙌 The tournament kicks off in exactly one year #U17WWC | @IndianFootball pic.twitter.com/yhM3qCDuEu